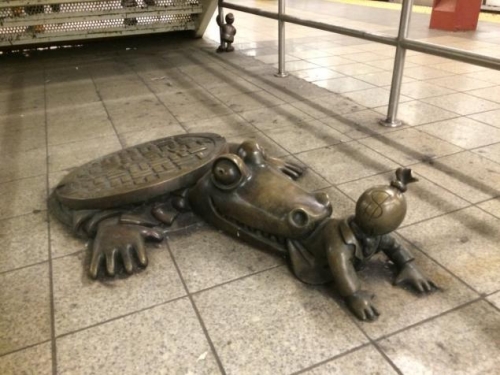 The story behind the strange 8th Ave. subway statues

At the Eighth Avenue subway station, sewer alligators are not an urban legend.

Anyone who’s been through the 14th St./Eighth Ave. station has probably seen the bronze gator sculpture — and probably wondered what it means and why it’s there.

The underground gators — along with dozens of other whimsical creatures — are part of the permanent art installation housed at the intersection of the A,C,E, and L lines.

Titled Life Underground, the political cartoon-inspired project was commissioned in the 90s along with the station’s renovation. A certain percentage of each renovation budget is dedicated to permanent art for the station – and in this case that sum came out to $200,000.

With that budget in mind, when the MTA’s art program, Arts for Transit, put out a call for project proposals to be installed in the soon-to-be rehabbed station, Kansas native Tom Otterness was one of the respondents.

Today a Lower East Side denizen, Otterness is an established figure in the New York City art world. Now 63, he’s been here since he moved as a fresh-faced 18-year-old studying at the Art Students League. He does private commissions and gallery shows, but his focus is on public art.

He was a natural choice among the hundreds who applied. Otterness said the initial applicant pool of around 800 got whittled down to five or six applicants. The finalists then submitted full proposals, drawings and details.

“I remember researching the building of the subway and going through old photographs of the construction in 1890s,” he said. While those construction efforts proved one source of inspiration — some of the statues depict workers carrying giant tools – another source was the work of 19th century political cartoonist Thomas Nast.

Nast’s work famously addressed the corruption of Tammany Hall and Boss Tweed. In one drawing, he portrayed the notorious politician with a moneybag for a head — and that’s an image Otterness lifted directly from Nast and brought to life.

Many of the other statues play on similar themes of class and corruption, such as the depiction of a worker woman reading a book on top of a possibly dead businessman lying on a pile of money.

A statue with an even clearer message sits at the top of a staircase: It’s a large man in a suit and top hat wrestling away coins from a tiny figure just inches high, adorned in simple dress.

Otterness said that, after looking through Nast’s work, “I thought not that much has changed in 100 years.”

Some of the works are inspired by urban legends, like the statue of an alligator — in a suit — crawling out of manhole cover and hauling off a moneybag-headed figure into the netherworld.

“I finished a lot of the original work in five years but the renovation took ten years so I had a chance to show them aboveground in a few places.” One of those places was the Doris Freedman Plaza at the corner of Central Park, where Otterness configured some I-beams to simulate an aboveground subway.

Though the aboveground displays went up in the mid-90s, underground installation didn’t begin until 2001 and was completed in 2004.

“I ended up giving 4 or 5 times what I was commissioned to do – I just got so excited I donated more and more work to the system and in my view nothing didn’t fit, everything seemed to have a place,” he said.

“A lot of work is about class and money and crazy surrealist images that don’t make any sense but it just sort of fits.”

Out of the many members of the artist’s Lilliputian kingdom, Otterness has favorites.

“I like the rat eating the coin from the money bag, he’s all polished up.” The more people touch a statue the shinier it gets – so it’s easy to pick out the crowd favorites.

“I guess another one of my favorites is the moneybag head on the staircase,” Otterness said. “He’s polished to this bright shine from people handling him. I figure they’re on the way to work and going to play the numbers and they rub him for a bit of luck.”