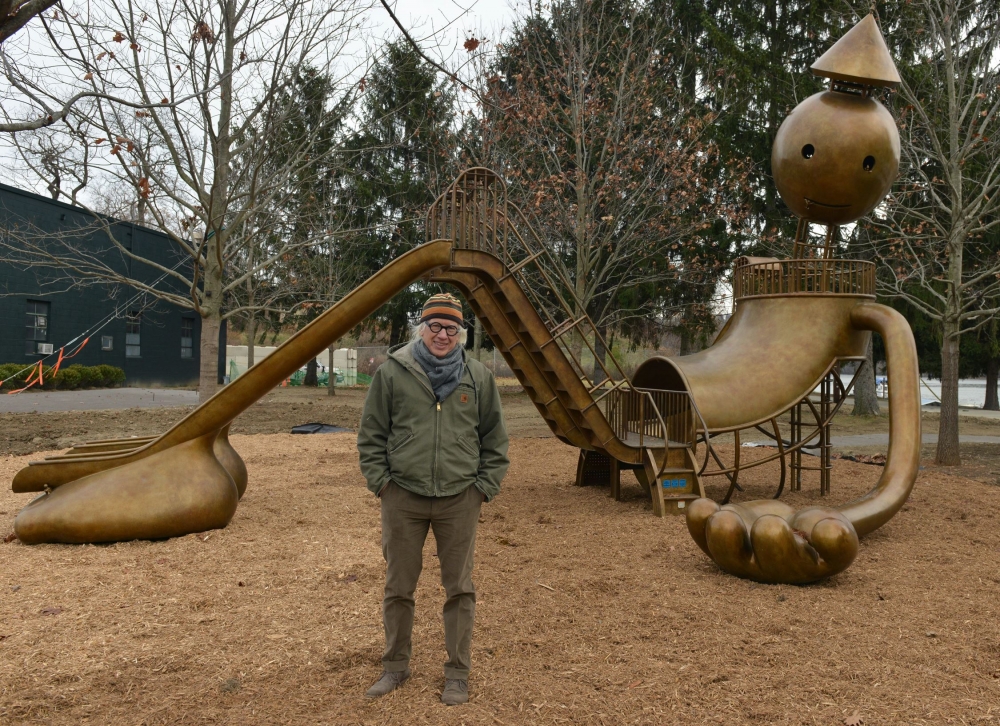 Next Sunday is the big day for all the children who have been waiting to clamber aboard a gigantic reclining sculpture that settled into a grassy patch of Aspinwall Riverfront Park nearly a year ago.

“They see it through the trees, and they just shriek with joy,” said Susan Crookston, an Aspinwall resident and driving force behind the change of destiny for riverfront property that was slated to become a parking lot.

A free public celebratory opening will be held from 11 a.m. to 1 p.m. next Sunday to mark the completion of construction and landscaping on the 11-acre property that includes walking trails and a small amphitheater that doubles as a sledding hill in the winter.

But the draw for children — and for cultural tourists from within and outside the region — is “Playground,” a 30-by-30-by-24-foot bronze sculpture by New York artist Tom Otterness. The main figure incorporates a slide and nooks to explore, some of which are populated by smaller figures that exude the same delight of discovery as their little human counterparts.

“The little people turn it,” Mr. Otterness said. “When you see the little guys, the big figure becomes the world, a globe with these little figures walking around. It’s their world and it’s a separate scale from us — climbing the mountain, going into the caves, exploring this world.”

The sculptor doesn’t like to put sculpture on a pedestal.

“This is another step between sculpture and architecture. The kids can use it as architecture, go inside and outside of it. Look out the eye, and as a child you are that 30-foot figure. Someone who works with parks and kids told me kids are hypersensitive to scale. They’re always measuring themselves — against other kids, adults, the world around them.”

When he visited in November Mr. Otterness called the sculpture’s site “remarkable. I was really taken by it when we first drove up to it. Just beautifully sort of nestled in.”

He also appreciated the variety of economic and social diversity in communities near the park. “That was most touching for me, that it’s a really mixed community.”

He said that he’s enjoyed watching people mingle at other of his artworks. “Sometimes public art functions as an excuse for strangers to talk to one another, through the art. We don’t realize how few places there are where it’s acceptable to talk to people you don’t know. Children facilitate that naturally.”

“We installed it in stages and on the last trip landed around midnight. As we got near the sculpture, we could hear screaming, and then there were kids all over, and I thought, ‘Oh, it’s working.’ ”

Mr. Otterness’ figures are structured upon basic sculptural shapes like cubes, spheres and cones, and generally not embellished, in order to reflect a universality and, to a degree, timelessness. In a bow to Hamad’s international status, he varied the little figures. Some were dressed in Middle Eastern garb, others as cowboys or wearing German lederhosen.

There are 20 to 30 little figures on each of the “Playground” series sculptures, and he places them differently on each one. They’re added at the end of the casting, at the foundry. The artist walks around the large work, noting where eye contact is made and placing a surprise there.

“It’s the improvisation at the end of the job. It kind of brings it back to life for me.”

The possibility of adding some small figures beyond the main one in Aspinwall was broached in November. It’s “just talk at the moment,” Mr. Otterness said last week, “but it’s something I’d like to have happen. We’ll see how it progresses.”

It was hoped that the artist would return for next Sunday’s celebration, but he’s working day and night, he said, on his contribution to an exhibition, “The Value of Food,” which opens next month at The Cathedral Church of Saint John the Divine in Manhattan.

“How often do you get a chance to work in [the equivalent of] a medieval cathedral?” he said. He’s creating new work that will be displayed in niches within the Episcopal church. Mr. Otterness will also exhibit silver point drawings in “Tom Otterness: Metal on Paper,” opening Wednesday  at Marlborough Gallery in New York.

“Playground” was purchased by The Grable Foundation and is on long-term loan to the park, an arrangement that essentially means that the foundation will handle maintenance of the artwork, which is valued in excess of $1 million. Site preparation by the foundation included a nine-page shade analysis made before selecting the 25- to 30-foot-high 2,000-pound oak trees that will keep the bronze work cool in the summer sun.

Aspinwall Riverfront Park is not a municipal park and is open to everyone, Ms. Crookston said.

“It’s a private park with a public purpose. The mission of the park is to be an independent, self-sustaining community treasure that becomes a catalyst for the expansion of trail and green space along the river.”

This is the first stage of park development, which will now turn to river access and a welcome pavilion with running water and restrooms. In the initial planning stage, 1,800 local residents were asked what they most wanted in the park. Trails, nature and a playground were the first three preferences.

“The fourth was river access,” Ms. Crookston said. “Our first goal was to open the park so that the hundreds of children who helped to raise money and clear the land could enjoy it while they were still children.”

Initially, $2.3 million was raised through grass-roots efforts to acquire the property. Fundraising continues for the next stages of development and to establish a $2 million endowment. So, far $1.15 million has been raised for that.

“Playground” is “a special piece, and I’m really thrilled to have it. It’s kind of a benevolent presence in the park,” Ms. Crookston said.

The celebration will kick off at 10:45 a.m. Sunday at the lower Aspinwall ballfield with a bagpipe parade led by 14-year-old volunteer Glenna VanDyke. Visitors are advised to walk from the ballfield with the parade as parking is limited at the park, which is at 285 River Ave., Aspinwall (15215). The opening will feature a ribbon-cutting ceremony, music, food trucks and face painting. A specially designed T-shirt will be sold for $10.