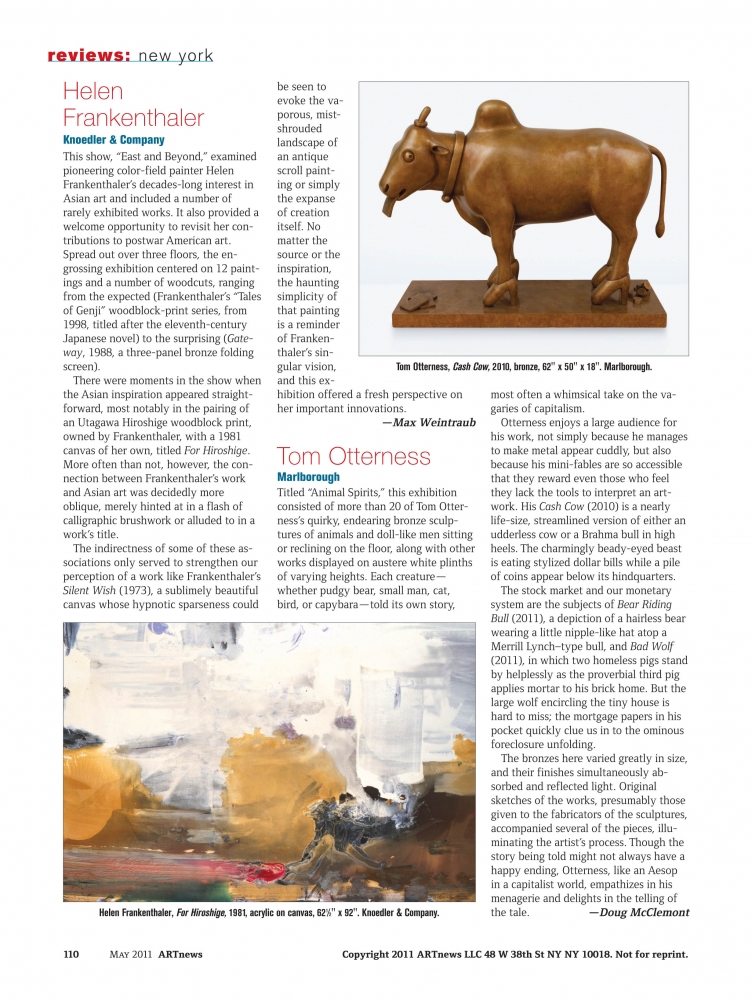 Tom Otterness
Marlborough
Titled “Animal Spirits,” this exhibition
consisted of more than 20 of Tom Otterness’s
quirky, endearing bronze sculptures
of animals and doll-like men sitting
or reclining on the floor, along with other
works displayed on austere white plinths
of varying heights. Each creature—
whether pudgy bear, small man, cat,
bird, or capybara—told its own story,
most often a whimsical take on the vagaries
of capitalism.
Otterness enjoys a large audience for
his work, not simply because he manages
to make metal appear cuddly, but also
because his mini-fables are so accessible
that they reward even those who feel
they lack the tools to interpret an artwork.
His Cash Cow (2010) is a nearly
life-size, streamlined version of either an
udderless cow or a Brahma bull in high
heels. The charmingly beady-eyed beast
is eating stylized dollar bills while a pile
of coins appear below its hindquarters.
The stock market and our monetary
system are the subjects of Bear Riding
Bull (2011), a depiction of a hairless bear
wearing a little nipple-like hat atop a
Merrill Lynch–type bull, and Bad Wolf
(2011), in which two homeless pigs stand
by helplessly as the proverbial third pig
applies mortar to his brick home. But the
large wolf encircling the tiny house is
hard to miss; the mortgage papers in his
pocket quickly clue us in to the ominous
foreclosure unfolding.
The bronzes here varied greatly in size,
and their finishes simultaneously absorbed
and reflected light. Original
sketches of the works, presumably those
given to the fabricators of the sculptures,
accompanied several of the pieces, illuminating
the artist’s process. Though the
story being told might not always have a
happy ending, Otterness, like an Aesop
in a capitalist world, empathizes in his
menagerie and delights in the telling of
the tale. —Doug McClemont